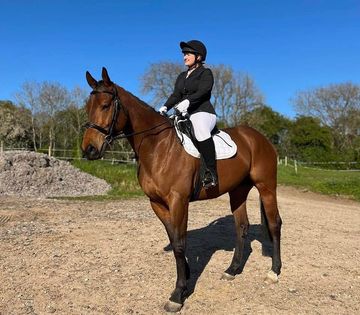 Description
Real event prospect! Really pretty head turning 5 year old gelding. Wetherbys passport. I’ve had this boy since 3 year old and he’s been produced very slowly! He has raced on the flat but only twice and was deemed too slow.
I don’t often say this but this horse is worth is weight in gold. Not only does my 11 year old niece pop on him and ride him round like a school pony, he also has shown super willing for eventing. His school work is still green in the trot canter transition which will come with more experience. His jump is beautiful! Scope to die for and a real love for this. He has never bolted, can be stronger xc but never had an issue with breaks (he is snaffle mouthed). He has been used to nanny my other baby horse through all sorts of traffic, farm machinery!
Has schooled round BE courses popping 80/90cm at home. Has plenty of potential to move up the levels with someone who is able to teach him the technicalities now.
Has also been out to show jumping and RoR which he has been consistently placed including low level dressage. Falls asleep in the warm up if stood around. Nothing phases this boy. Beautiful ground manners, the children go in his stable to groom him. Doesn’t kick, even gets swept under when he doesn’t want to move. fabulous to shoe, teeth, clip (falls asleep). Will hack alone or in company. Has been to pleasure rides and the beach!
*Home is extremely important to me for this boy and I’d love to keep in touch. He is not cheap as has huge potential to go far. Ideally wanting to sell to show jumping/show cross/eventing home. Home will be vetted. Seriously enquiries only
Reviews